I have never customized the stereo in any vehicle I’ve ever owned. Why then did I feel the need to replace the one that came in our trailer? It was that bad.

The stock stereo was a Furrion DV3200 and the stock speakers three pairs of Jensen MS5006B. My issues with the setup were numerous:

In mobile electronics, there are three basic classes of products: for a car, for RVs, and for boats. Car items are typically intended for an ignition-based system rather than a stationary living area, which leaves RV and marine. Marine stuff, when available, is universally better quality and often not substantially higher in price.

I focused my search on marine-grade stereo systems, which typically come as one of two types: those that are just a stereo, and those meant to connect into a full entertainment center and have some means of playing video. The latter are currently entirely DVD, which is fine for me, but it’s worth noting for BluRay enthusiasts.

The head unit I chose was the Fusion MS-AV755, which is made by a division of Garmin. It provides AM/FM tuning, DVD playback, USB playback, ARC (the HDMI term for routing audio from the TV through the stereo speakers), Bluetooth playback, and satellite radio. Unlike the Furrion head unit, this is a single DIN in size, but it’s able to mostly cover the screw holes from the Furrion mount and needs minimal touch-ups to the cabinet enclosure.

For the speakers, I went with the Polk DB522 speakers. They’re marine certified, fit in the same holes, and provide better volume and response.

I started by replacing the speakers. There were only two steps: 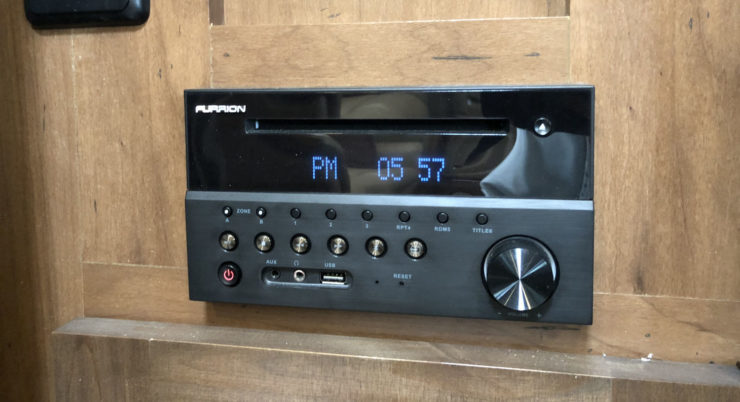 The Furrion unit is a two DIN high, single DIN deep stereo — only one DIN of height is cut out of the enclosure. Popping off the face of the control half on the bottom reveals four screws holding it in place. Unscrew them and the unit should come loose from the cabinet. To the right of the Furrion, inside of a half cabinet door, is an access panel that can be removed to more easily access the rear where the wiring is. 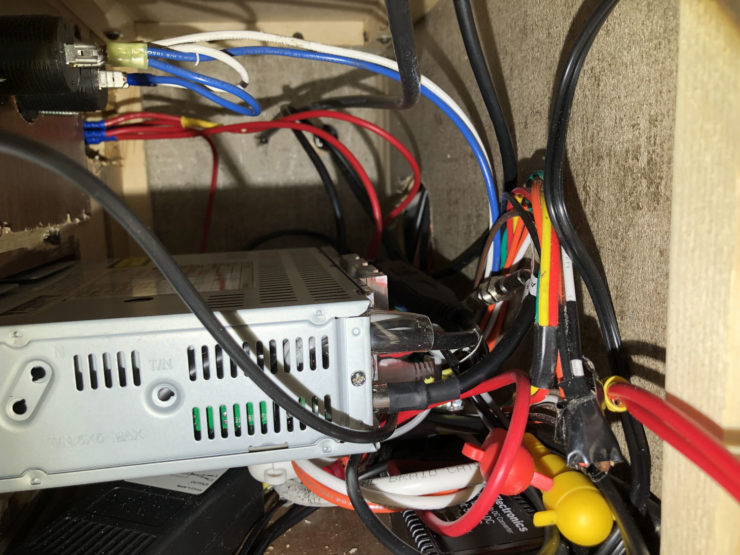 A wiring harness (the speaker output and power) and a few standalone wires (radio antenna, HDMI output, and an RCA pair) come out of the back of the head unit. Each of these has a matching spot on the Fusion head unit, so it’s as simple as unplugging from the Furrion, removing it entirely, and positioning the Fusion to plug it into each of them.

I was able to reuse two of the screw holes, and the other two were touched up a little with a furniture pen. 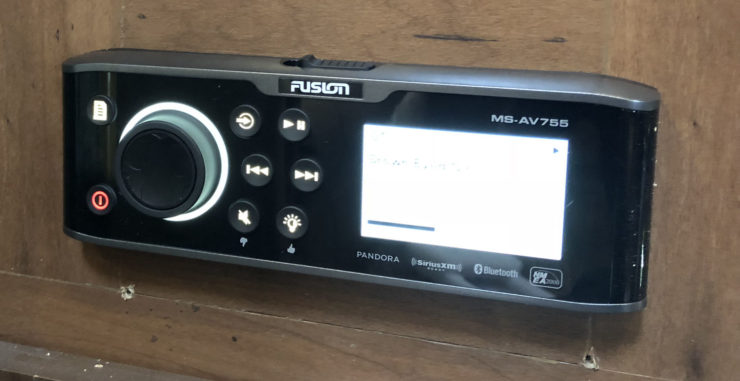 Playback initiated from the Fusion is pretty straightforward — tune in a radio station or pop in a DVD. From Bluetooth on a phone or similar, it just needs the initial pairing and then switched to the appropriate input mode.

Getting audio from the TV (e.g., its antenna or cable tuner) or from a device plugged into the TV (e.g., a satellite receiver or Apple TV) is more tricky. This needs to leverage the ARC support (short for audio return channel) of the Fusion’s HDMI input.

Of course, where would the fun be if that wasn’t exceedingly difficult and prone to turning itself off? The Jensen TV, popular in RVs, must be configured both to use an audio receiver and configured for the correct audio format. The latter setting it has always remembered, but the former seems to revert back to off about half the time.

The SPDIF Type was set to RAW by default on my TV, but the Fusion only supports PCM. If not set, you’ll only hear static. 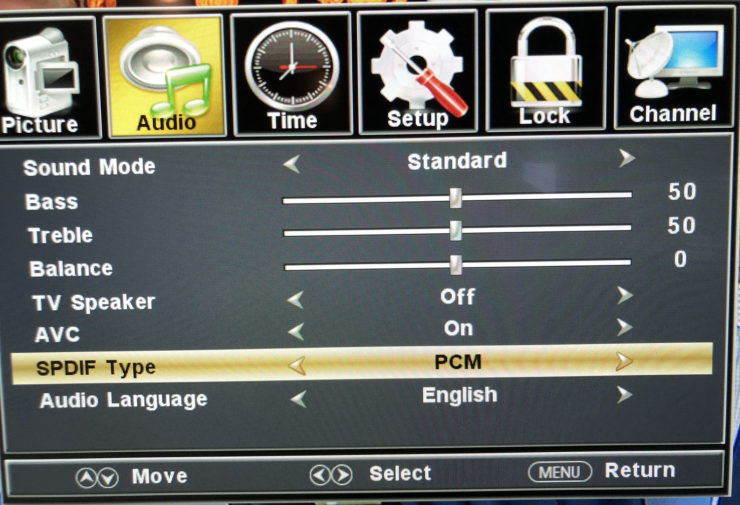 This tells it to take input from the HDMI cable and output it to the speakers. 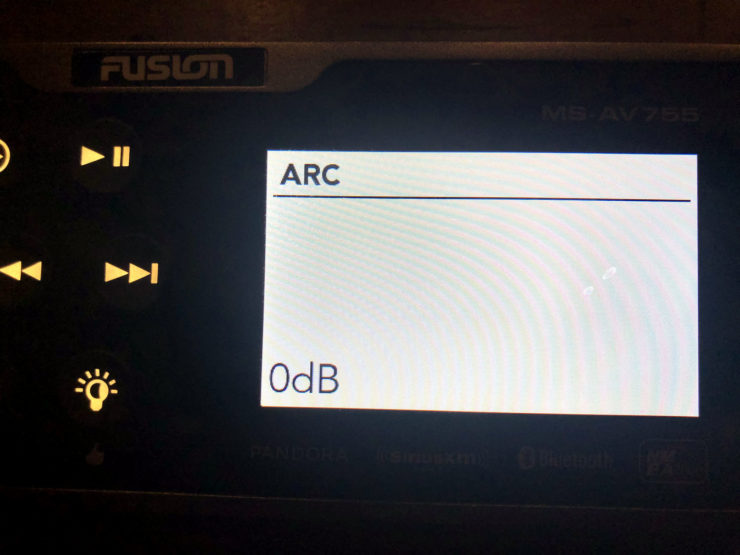 On the TV, it buries this setting under the HDMI CEC option group. Inside that is the Audio Receiver setting that needs turned on.

If this does not work, turn the TV off, back on, and try again. 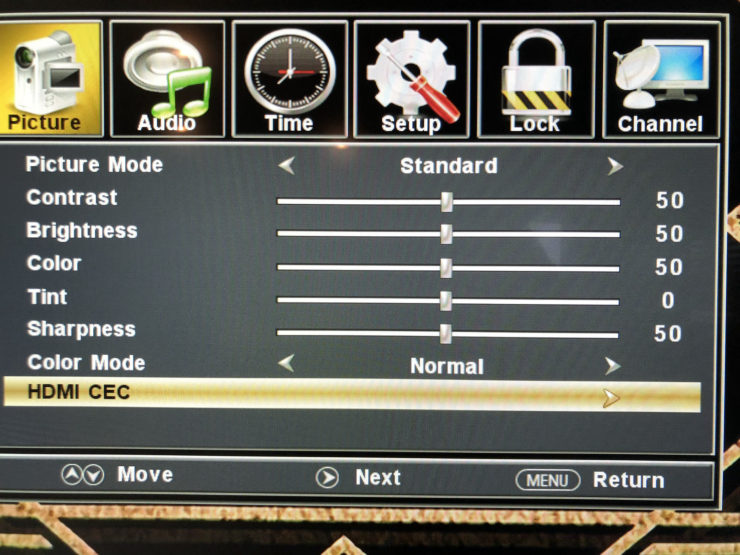 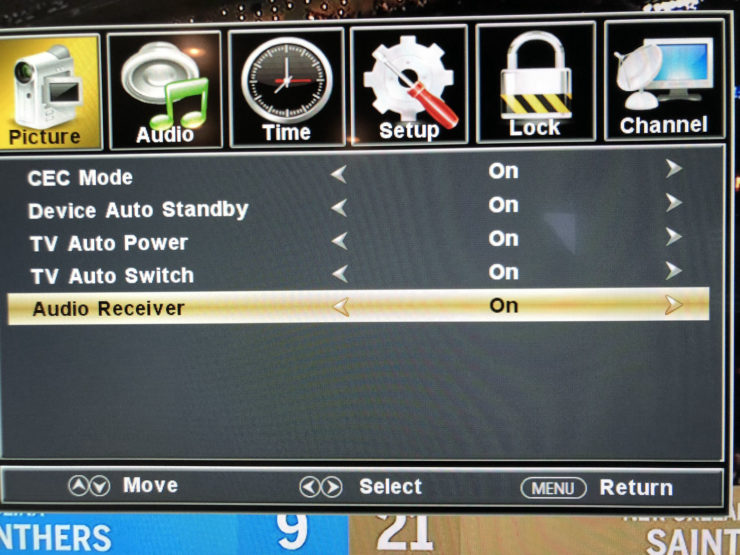 At this point, I have a stereo unit with all of the advertised features of the Furrion that actually work plus a few more like an iOS app to remotely control volume from outside the trailer. The speakers also sound much better.

If I can ever decide how and where to install it, I would like to add a subwoofer as well. The small ceiling-mounted speakers can only provide so much bass, and the addition of a sub would be a great improvement. Marine subs and amplifiers come in 12V varieties, but the locations I have available for installation are hard to get speaker wiring to.

Lastly, I wish the HDMI CEC support included volume control passthrough. I’m not sure whether it’s the fault of the Jensen TV (probably) or the Fusion, but I’m stuck using two remotes instead of one.