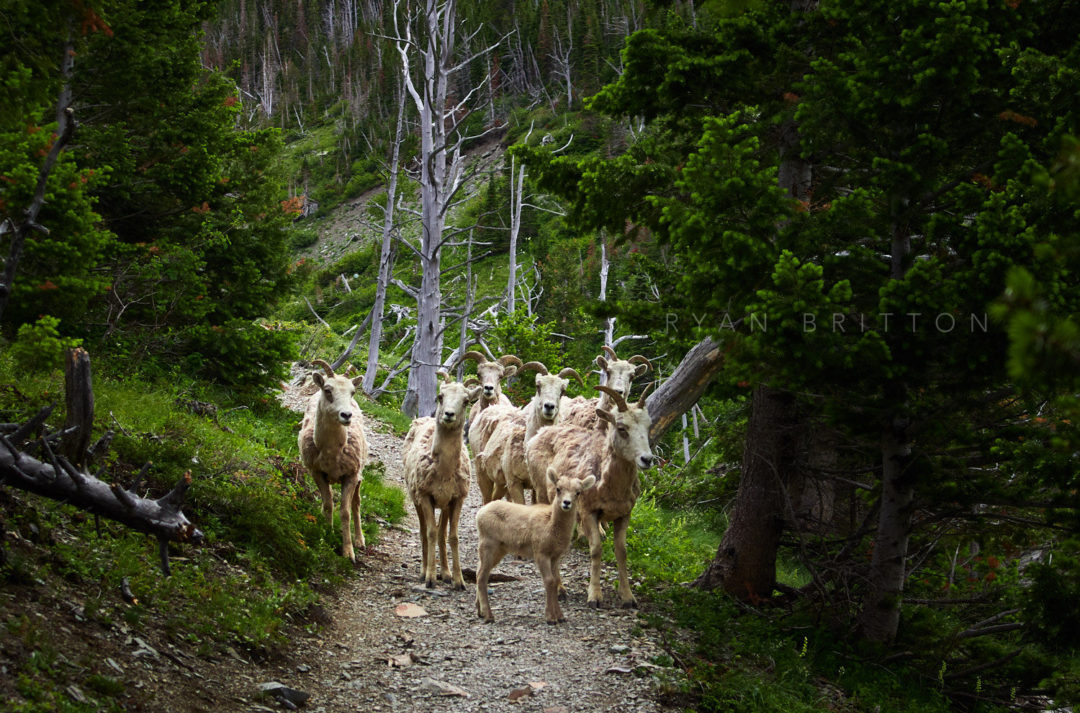 Of the national parks, Glacier is the closest to home for us. It’s also one of the most popular, which makes planning a trip there a bit challenging.

The park itself has two major home bases for tourists: West Glacier, MT at the west entrance and St Mary, MT at the east. On the east side there are also two “dead end” entrances that service portions of the park that aren’t connected all of the way through: Two Medicine in East Glacier, MT and Many Glaciers in Babb, MT. We stayed in West Glacier at the KOA.

The best lodging for Glacier is camping, whether done in a tent or in an RV (or even one of the many rental cabins and lodges). Glacier has a few different park service-run campgrounds, but they’re all walk-in only. It’s only the cabins/lodges and private camping spots that are reservable (usually best reserved as soon as the reservation window opens).

During peak season, the in-park campgrounds are typically filled daily, sometimes in the early morning while other days fill later in the afternoon. This link leads to a page where the park service updates the occupancy status of each one daily — it is only updated if one fills, never showing late departures that later re-open it until the following day.

The in-park campgrounds are full dry camping, offering vault toilets and shared water spigots but little else. Any other amenities (e.g., a generator) must be brought yourself, and most sites are too shaded for any meaningful solar collection. Outside the park, at the private campgrounds, sites are generally full hookups. 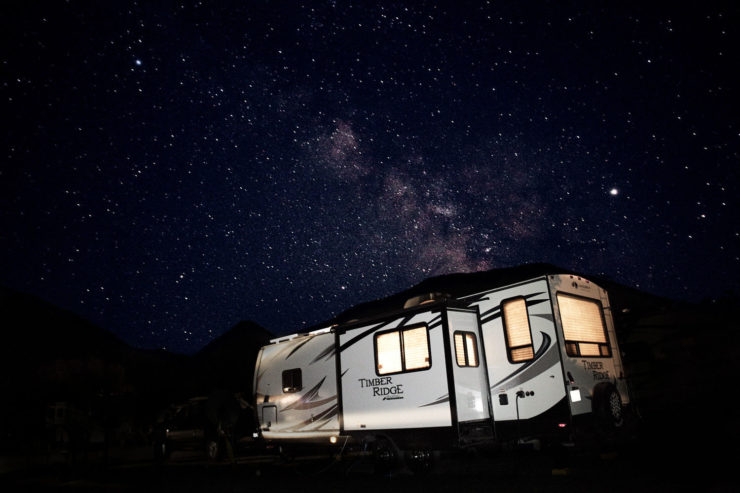 There is no cellular service inside the park except for what bleeds in from the towers outside. If doing anything more than basic hikes, it’s probably smart to acquire a satellite communication device in advance.

That said, what cellular service there is (Verizon is the one I tried) is barely usable for more than voice calls. The coverage in the area is so saturated during peak visitor season that it’s questionable whether any data will load before timing out. Campground WiFi like KOA offers suffers a similar fate, trying to split a fixed-sized link over too many connections.

I feel the only viable internet option at this time is satellite, and you will not achieve the elevation and azimuth needed from within the camping areas of the park.

There are few decent options in the area without driving to Kalispel or Whitefish, and most of those are Mexican food (the burritos are good, but you can only eat so many). Our normal approach of planning to eat one or two meals out and cooking the rest at the trailer worked well here.

Beyond typical camping gear, Glacier benefits from some secondary gear. This includes cold-weather clothing, rain gear, a first aid kit, and bear spray. Also, don’t skimp on the camera if that’s your thing — phone cameras are generally adequate for day-to-day things, but the sights in Glacier can justify bringing something bigger. I’m currently using a Canon EOS M100, which offers many of the large SLR benefits in a smaller and lighter package (and vastly lower price point).

It can often be 80°F in the campground at the base while dropping to 40-60°F in some of the higher elevation hikes. I’m always hot, but for those who get cold easily, consider bringing a light second layer. Similarly, rain can come on quick if there’s any in the area, and it rains heavily when it does, so a light rain jacket can save a hike. 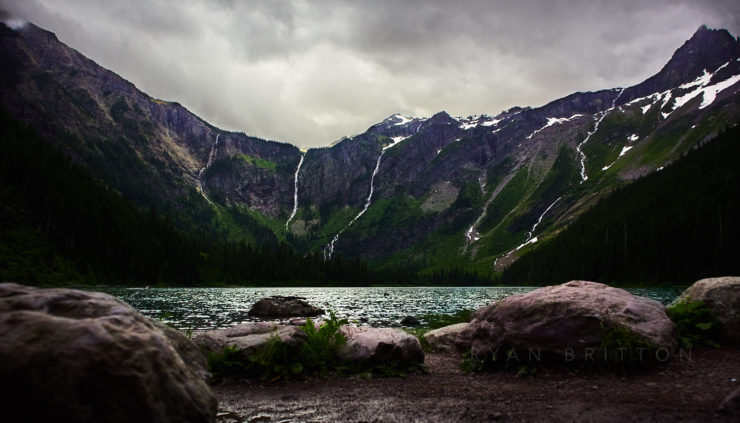 It rained the entire way back out of our Avalanche Lake hike.

As I mentioned before, there is no cellular coverage in the park. If you get injured or stuck, the only ones you can count on is you and your group. To that end, it’s smart to carry first aid equipment for the most likely types of injuries that can inhibit an easy hike out. A first aid kit with materials to treat a break, sprain, or puncture wound could mean the difference between making it back to camp or spending an unexpected night out. This book is a great reference for treating common injuries.

Glacier is full of wildlife, and one of the species present is the Grizzly Bear. Of the two most dangerous animals found in the park (the other is moose), Grizzlies are less likely to be scared off by or avoid you on their own. Bear spray is your best contingency against them if a bad situation arises. I recommend bear spray over a firearm for few reasons: (1) the goal is just to scare them off; (2) the size of caliber needed for a Grizzly is heavy enough to be impractical hiking; (3) there are often other people around so your backdrop is too risky; and (4) Grizzlies are a protected species, which can create a ton of legal trouble. This isn’t exactly desolate backcountry — on the off-chance you do have an encounter with a Grizzly, the goal is only to get them to run away so you can get yourself somewhere safer. Lastly, dogs are banned on Glacier’s trails because they provoke Grizzly attacks. Do not take them hiking with you.

Like many parks, the sights at Glacier are split into views you can see from the road from the many pull-off areas and the attractions you must hike in to. The former are easy, and you can often find room to park most any time of day because stops are so brief. The latter can benefit from some planning and backup options.

The vast majority of the trails at Glacier start at one of the major parking areas. Because the park is so popular, these fill up quickly, meaning you may be stuck deferring a planned hike to a later time. You may also opt to make use of the park’s shuttle system and trade the question of parking availability for one of seat availability.

The link above for campsite availability also has parking availability. It can be used to determine whether or not a parking spot is likely to be open, though it also behaves like the campground availability list: the status is only updated once full for the first time that day and does not account for people leaving until the following day.

Every day that we went into the park, the parking lots we ended up parking at were reported full. Our trick was to take advantage of the nearly 10:00 pm sunset and go in later in the day. By early or mid-afternoon, the early birds were already heading back to camp in enough numbers to make some parking available. We didn’t start our Avalanche Lake hike until nearly 5:00 pm, for example.

McDonald Falls has viewpoints on both the north and south sides of the creek. The more open view of the falls is along the road at the viewpoint on the south side, but the trail along the north side is enjoyable as well. The trail is a short, very easy out-and-back hike with little elevation gain.

Hikes: Trail of the Cedars

One of the few wheelchair accessible trails, Trail of the Cedars is a combination paved/wooden walkway loop trail near the Avalanche campground. It’s interesting enough on its own and also services the trailhead for Avalanche Lake.

The longest hike we went on was to Avalanche Lake. This is an out-and-back hike that’s uphill almost the entire way and sometimes fairly steep. It parallels Avalanche Creek for most of its lower section and has some scenic slot canyon falls. The upper section before the lake is mostly forest.

Shortly after we arrived at the lake, it started pouring rain on us, so our view wasn’t as good as it could have been. Still, I enjoyed it and can recommend this one. 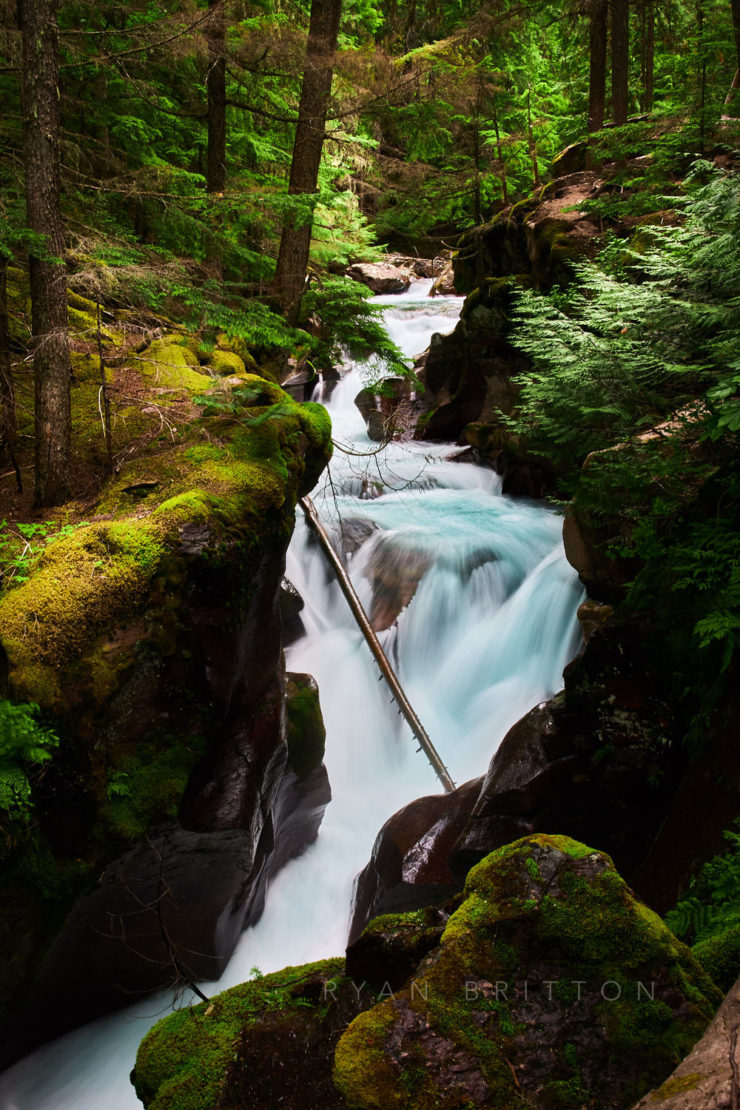 Running Eagle Falls is a short and easy hike from the Two Medicine area of the park. From the parking area, it’s a nearly-flat, roughly half-mile walk in to the falls.

If visited earlier in the season, the falls is actually a double waterfall with overlapping top and bottom streams. This was my favorite attraction of those we visited.

We chose to hike the Appistoki Falls trail in the Two Medicine area primarily because the distance worked well with the time we had available. Unfortunately, there never is a very good vantage point for it, so I can’t recommend it very strongly. The trail itself is generally uphill the entire way and has a small loop at the end. The one cool thing we encountered was a herd of female Big Horns leading their young down the trail.

It is impossible to see all of Glacier in a single trip. To make the most of your time there, it pays to research the different trails, factor in your fitness level and other physical factors, and choose the ones that appeal to you most. Many have large amounts of elevation gain, which can make them much more difficult than the same distance on flat ground would be, but don’t think the best sights are only on the longest hikes. Running Eagle Falls is one of the coolest waterfalls I’ve ever seen in person, and it’s less than a mile off the road on mostly flat ground. 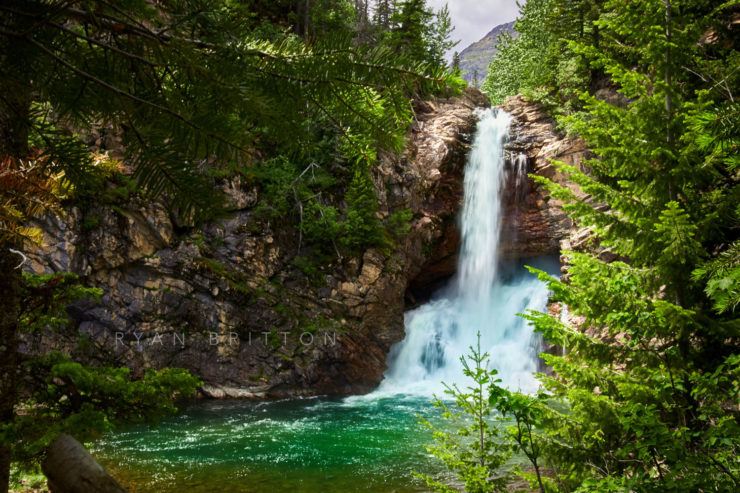 The season for Glacier is narrow with the main road often only fully open to traffic for July, August, and part of September, so it can be tempting to plan the trip for that window. Unfortunately nearly everyone else has the same thought. Except for seeing the road itself and trails starting at or near Logan Pass, you don’t actually need it fully open and could easily spend an entire trip visiting other sights and trailheads. When returning again, I’d seriously consider late May through early June and even into October.