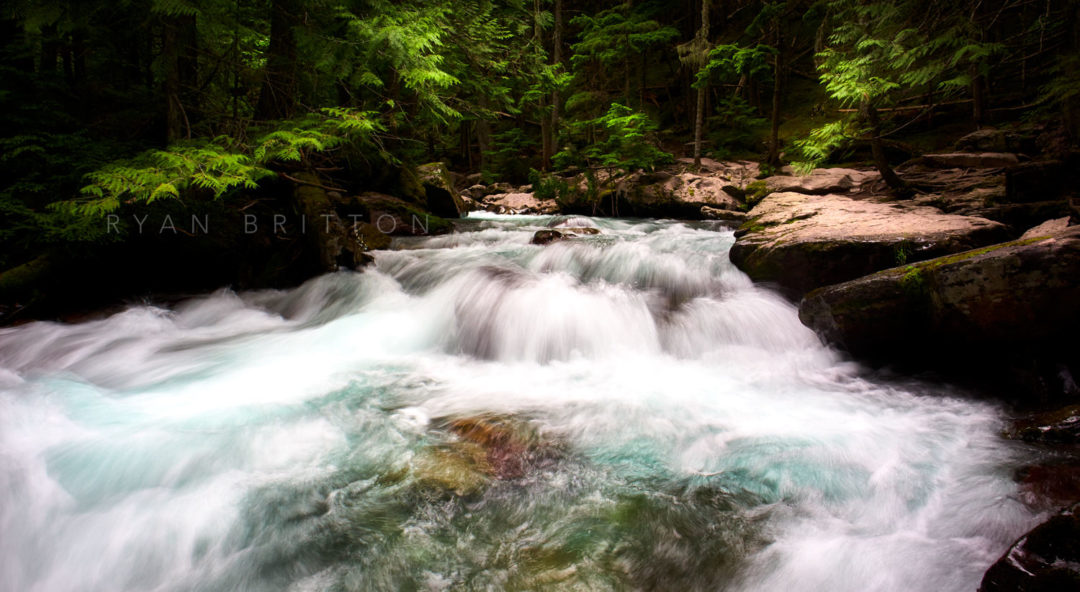 We’ve been riding off-road for many years, first with four-wheelers and then with UTVs. This year I got my own, a Polaris RZR 900 Trail, and it has allowed me to go much more often. This year we also finally started carrying radios in some of the machines — they’ve come in useful more than once. After using an existing pair of handheld GMRS/FRS two-way radios through the summer and fall, I wanted something more powerful and without batteries to recharge. I began looking into vehicle-mounted units.

Historically, consumer two-way radios have mostly peaked at two watts of power. The reason for this isn’t technological but legal with FCC-imposed frequency power level limits. In 2017, the FCC finalized regulation updates to combine the lower FRS and GMRS frequencies, increase the power limits, and renumber the channels of the higher GMRS frequencies. As a result, manufacturers began developing radio hardware to take advantage of this. Midland’s MXT line is one such example, and the 15W MXT275 is the one I chose for the RZR. It works with all our existing radios, can be mounted in an enclosed location (the main controls are in the handset), and provides more power for better reach in the mountains.

This is the hardware I chose:

I chose the radio I did because I didn’t want it exposed any more than necessary. Between dust, mud, rain, snow, hot, cold, and other weather, unsealed hardware wouldn’t last long. Because this head unit doesn’t have any controls, I’d be able to install it in the one safe place in the RZR: the glovebox.

I started by removing two machine screws under the front storage cover and detaching the dashboard. With the screws removed, the dashboard can slide forward out the tabs holding it place. I left the wiring connected, which allowed enough pivot room for accessing the back of the glovebox. 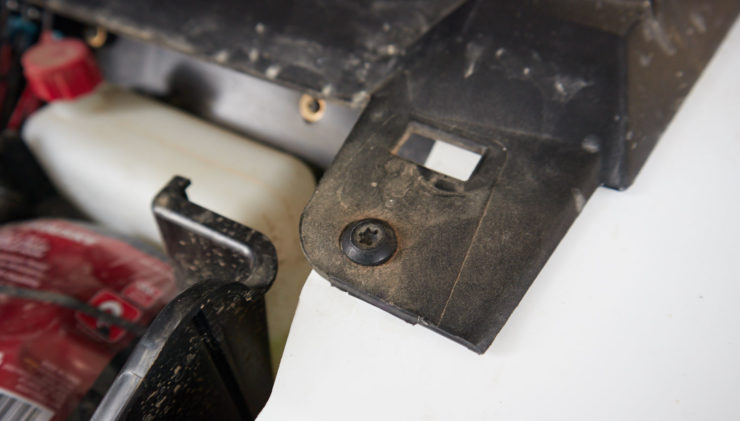 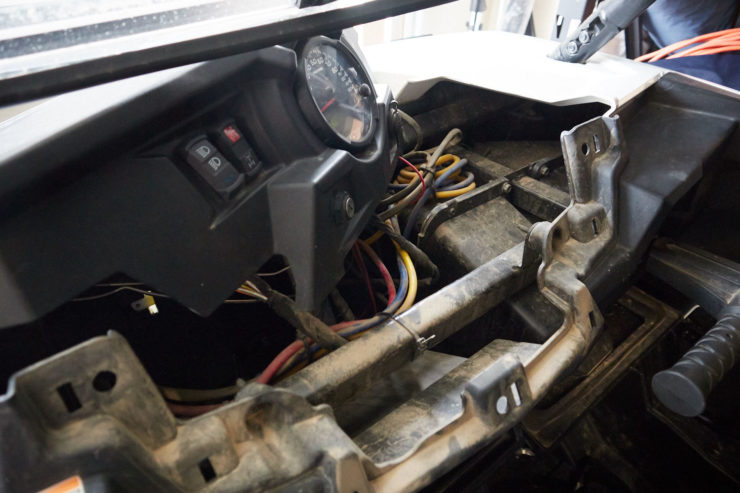 There’s an existing hole in the glovebox for the stereo wiring, but it was too small and too crowded to get the large PL-259 connector on the antenna cable through. I needed to drill another hole. 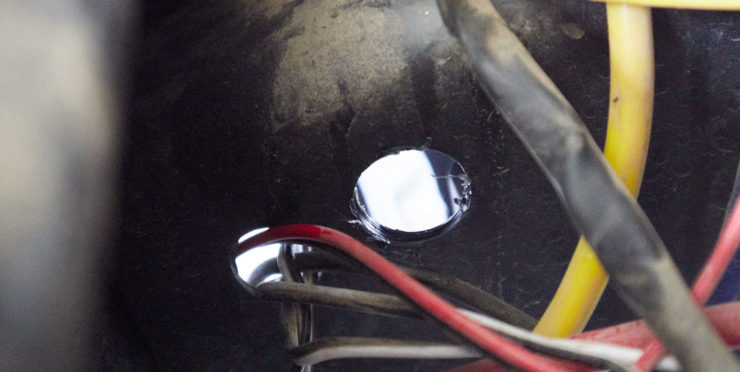 At the same time, I mounted the bracket for the radio head unit to ensure adequate space for its connectors. The bracket was screwed into the top of the glovebox to allow continued use of the bottom for dry storage.

The radio included a short 1/4 wave antenna that I was unable to use because it required a ground plane and I had no suitable surface (typically the roof). I purchased a 5/8 wave antenna, which was longer but would work without mounting on a ground plane.

It’s guaranteed that some part of the trip will be on a brushy trail with branches scraping at all sides of the vehicle. Any antenna mounted where antennas usually get mounted might last one or two rides. For this reason I chose a roll cage mount for the antenna and clamped it on as high as possible near the spare tire. 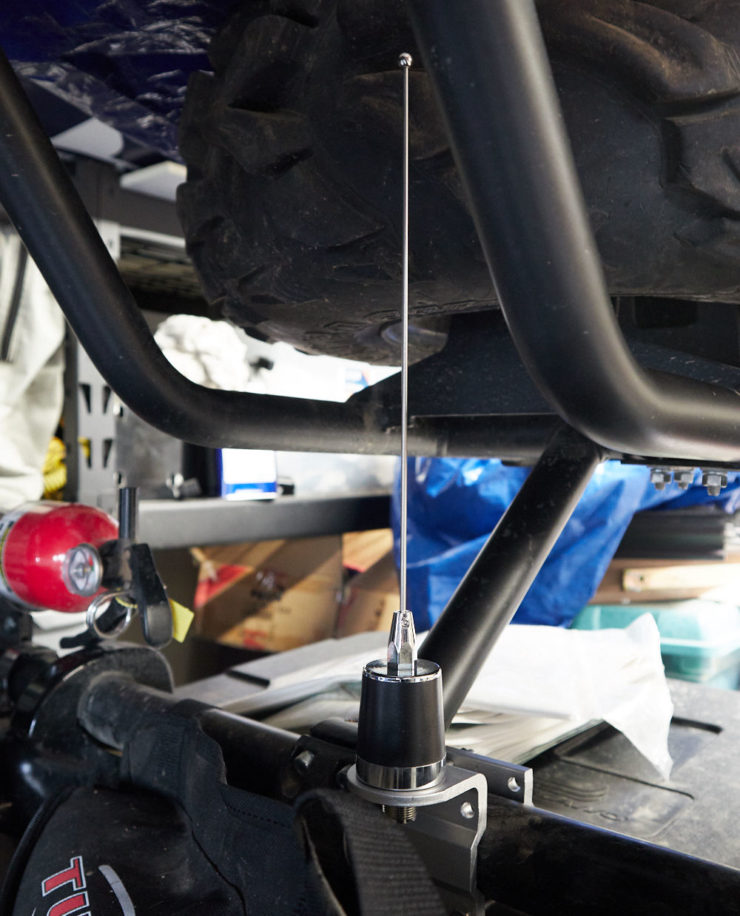 The previous owner had installed some speakers and ran wiring along the lower left tube of the roll cage. I opted to run the antenna’s cable along the same general path. This required complete removal of the front fender and removal of some of the body screws and plugs to provide enough flex in the plastic to slip the cable in.

As the ground shows, the frame of a RZR collects an incredible amount of mud and keeps a large amount of it around even after thinking you’ve washed it well. It was useful in deciding on the safest spot to attach the cabling, though. Once ran and zip-tied in place, I reattached the fender and reinstalled all removed screws and plugs (no extras!).

On the wall between the cab and front is a small bus bar for accessories. I poked the radio’s power cable through an existing penetration, cut off the 12V socket adapter, and crimped ring terminals on. These got connected to the appropriate posts. 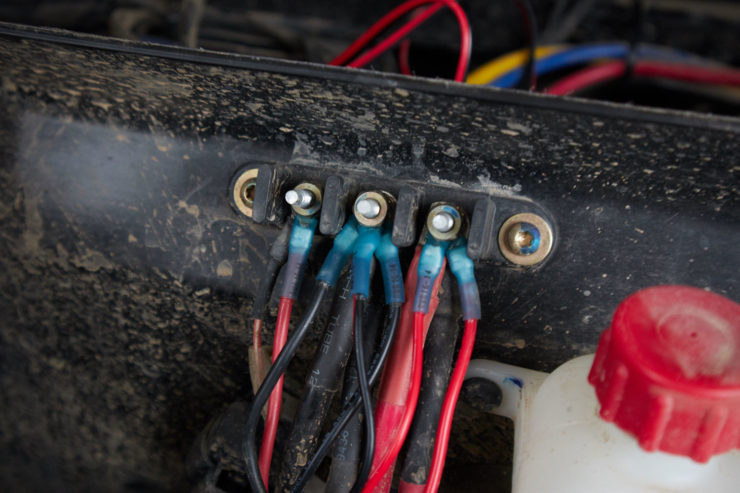 The only crimp connectors worth using in this location are marine-grade tinned copper with adhesive-lined heat shrinks. It gets wet, and it vibrates a lot. Nothing else would hold up.

To avoid routing the handset cable out the front of the glovebox, I installed an RJ-45 bulkhead next to the stereo controls. That connects back to the head unit with a standard network patch cable, which is ran through the same hole in the rear of the glovebox as the antenna cable. 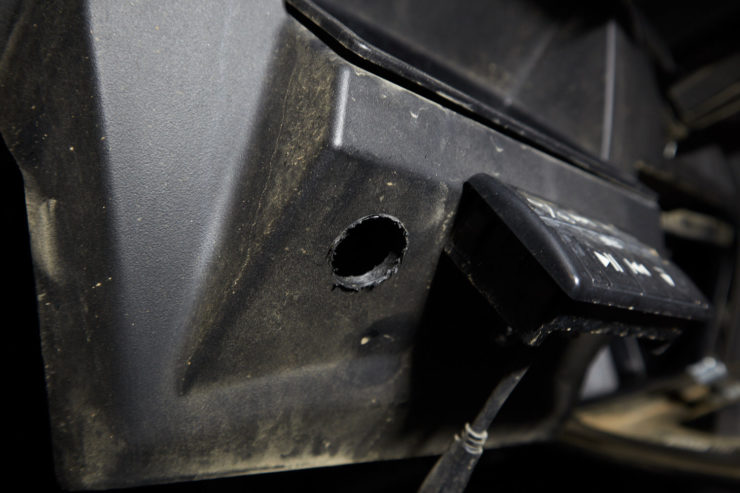 The RJ-45 bulkhead has an O-ring and screw cap, which allows the handset to be removed completely, sealed up, and be protected from water while transporting or washing the RZR.

Final Connection and Powering Up

I attached the antenna cable to the back of the head unit, plugged in the power, connected the handset extension, and slid the head unit into its bracket.

After plugging the handset into the bulkhead, I was able to power everything up and run a successful test. 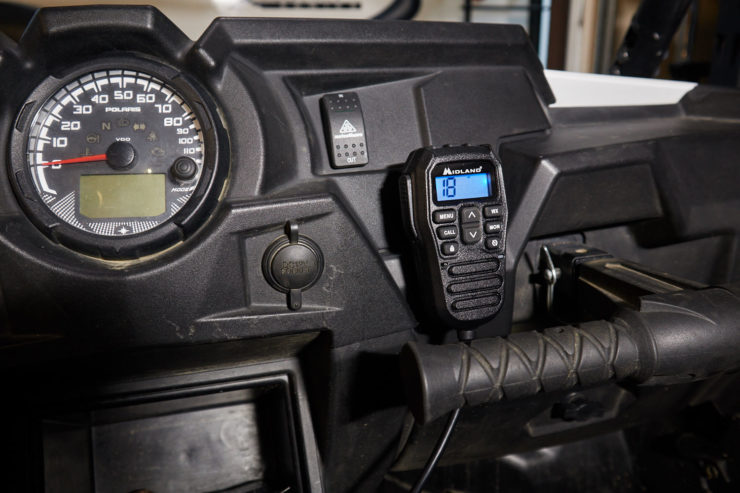 The last step was to reinstall the dashboard and its two anchoring screws.