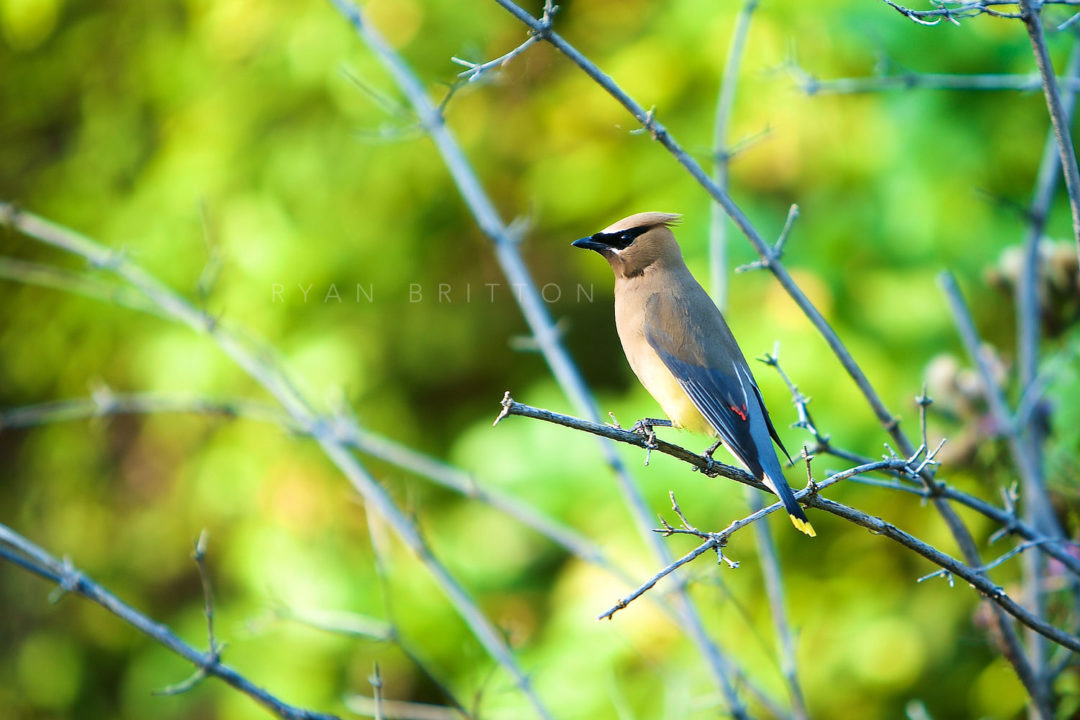 I’ve been a little light on posts recently. Part of it was a lack of small projects to write about (there isn’t much more I want to do to the trailer) and part of it is a lack of energy now that I have a new, very large project. I’m going to try to improve on that.

I have been doing much of my outdoor recreation in and around the same northern Idaho town for the last fifteen years or so. In that time, some friends have bought cabins there and a few have even moved full time. That was our plan last year when we purchased an empty lot with the intention of building on it, but things happen and plans change. We now own a 101-year-old house, our future ski cabin. 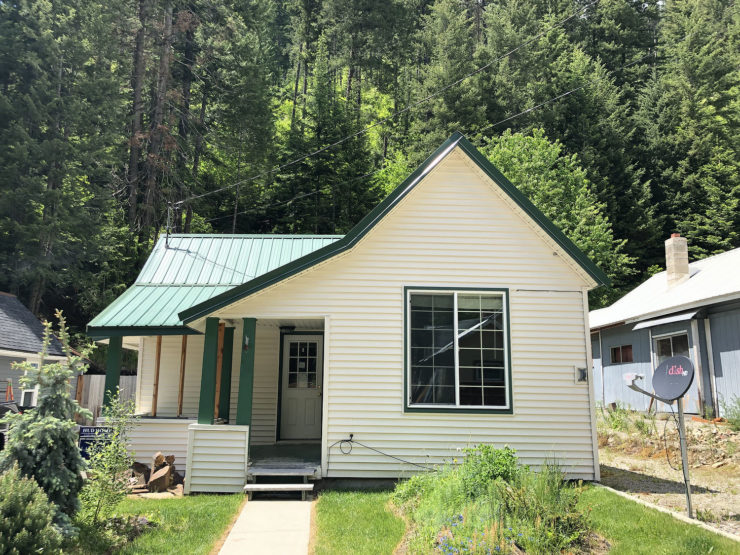 In May 2020, we stumbled upon a HUD listing for a small house in exactly the part of town everyone we know is in. It was priced at about 75% of market value, and we couldn’t pass it up. We contacted the listing agent, did a walk-through, and put in an offer.

From what I was able to learn, HUD has a minimum net amount they’re willing to accept for a property, and the list price is somewhere above that. The trick then is to estimate what that is and to offer at or above it. Theoretically, they will accept the first offer that comes in meeting that requirement and others (e.g., whether the listing phase it’s in is exclusively for owner-occupants).

We waited. One day passed, then two, and what we were told would be a quick response stretched on. Seven days from the initial offer we received the acceptance. Next came the mountain of paperwork that HUD is famous for (all digital in this case).

After adding all of my signatures and handing over the earnest money, it moved into the bank’s hands. They sat on it. For more than a month, nothing happened. Due to the 45-day closing timeframe HUD uses, I can only guess that the bank prioritized it lower because they had more time to get to it.

It wasn’t until near the end of June that we finally received a timeframe for the appraisal and the notice that utilities would need to be turned on. The HUD property management company only allows utilities to be turned on for a three-day window, which must be arranged for in advance to get approval, so to say that juggling those two schedules was difficult is an understatement.

Water was easy. It’s a local department, which meant I was able to speak with the people actually doing the work. Electric and gas were not. That’s a regional corporation, and the people I spoke to there had virtually no involvement in any part of it aside from putting in a work order. I also learned that the power company requires a state electrical inspection prior to turn-on when service has been off for more than a year.

The day of the appraisal, I had to line up (1) the water being turned on; (2) a state electrical inspection; (3) power service activation; (4) gas service activation; and (5) the appraisal itself. Somehow, miraculously, it worked. The water district guys arrived at 10:00 am to turn on water, the electrical inspector arrived around noon, and the realtor was able to get a same-day turn-on for both power and water through someone he knew. If even one part had fallen through, it would have delayed the appraisal by at least another week.

With the appraisal complete, the bank still needed to complete final underwriting, which stretched into the following week and then the week after that. Unlike private party sales, HUD charges for time extensions, and we were stuck paying for one due to the bank’s delays.

62 days from putting in the offer, we walked into the title company for final signing and payment.

Those remodels just kept adding layers, never clearing out the old stuff, and at the point I started assessing the walls, there were around three inches of material added to the original structure over the years. It included approximately 31415926535 layers of paint, two layers of wood fiber board, and at least eight different wallpaper patterns. The oldest wallpaper had a cheesecloth-like fabric backing. On each layer was an accumulation of oil or wood fire soot from a century of heating. The outermost layer, the walls of the house, are layered boards forming roughly 4″ of solid wood. The 2008 remodel wrapped that on the outside with a layer of insulating wrap and vinyl siding. 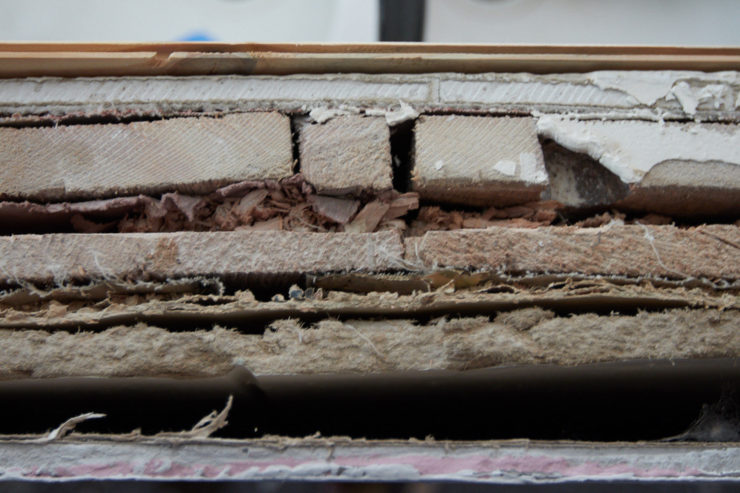 Our plan is to turn this one bed/one bath 800 sq ft house into two bed/two bath by moving one interior wall to form the second bedroom and building on a 6×14′ bathroom off the master bedroom for the second. The kitchen will be expanded by enclosing part of the covered porch, and the wall separating it from the living room will be replaced with a beam to open it up and offer an eating bar.

I’d love to leave the wood exposed, but it’s not insulating enough for the winters, so a new layer of modern insulation material will be installed over that before being finished with sheetrock.

We managed to strip and haul away 1000 lbs of the old material over the first few days with many more loads waiting to go. 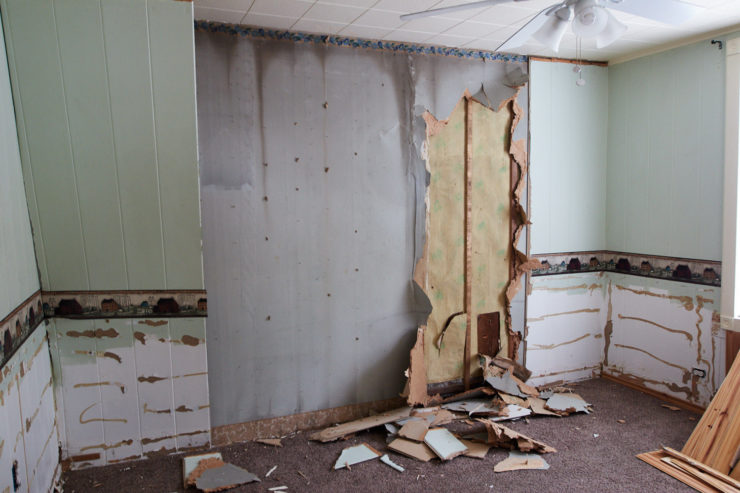 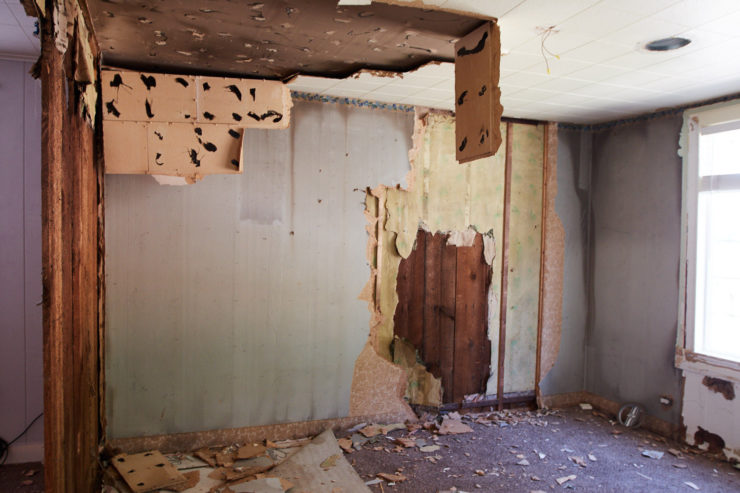 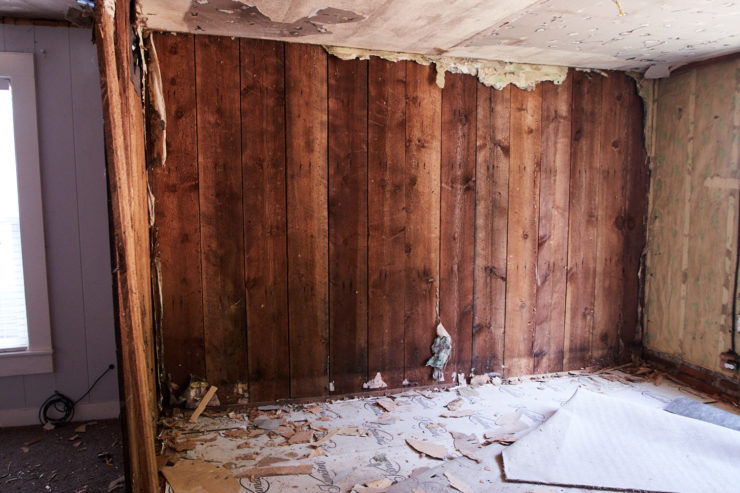 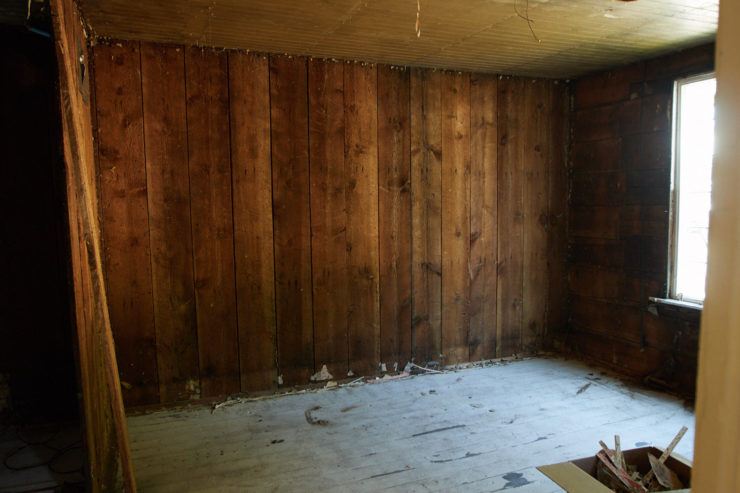 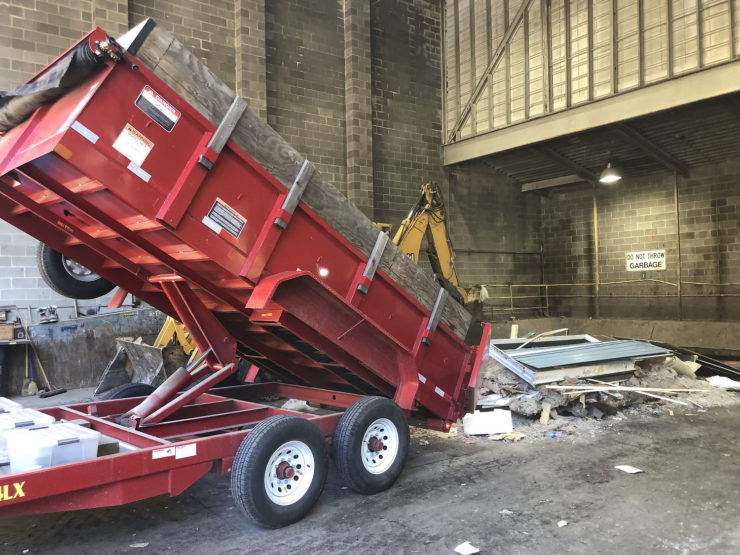